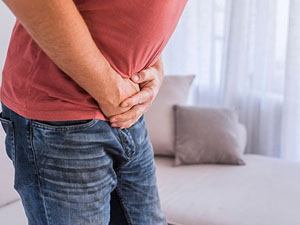 What happens under normal conditions?

What is prostate cancer?

Prostate cancer is a malignancy that usually arises in the glands and ducts of the prostate. It occurs when the normal process of cell growth within these structures becomes uncontrolled. This uncontrollable growth results in the development of masses of cancerous cells referred to as a malignant prostate tumor.

As with many cancers, the cause of prostate cancer is unknown, but, like all cancers, both genetic and environmental factors and their interactions are important in the development and progression of the disease. Prostate cancer is more common as men age, in African-American men, and in men with a family history of the disease. Its growth is also affected by male sex hormones (benign and malignant prostate growth are stimulated by male hormones and suppressed by lack of male hormones).

What are the symptoms of prostate cancer?

In its early stages, prostate cancer may not cause any symptoms. However, as the cancer grows, the following symptoms may appear: pain in the bones, weight loss, problems withurination (inability, weakened flow, pain, burning, etc.), blood in urine or semen and/or frequent pain or stiffness in the back, hips or upper thighs.

How is prostate cancer diagnosed?

Ideally, prostate cancer should be detected when it is so small that there are no symptoms. Early detection can be achieved by a prostate specific antigen (PSA) test and a digital rectal examination (DRE). A PSA test is a simple blood test used to measure the level of PSA, a protein produced by the prostate gland. During a DRE, the uro oncologist in Delhi gently inserts a lubricated gloved finger into the rectum; it may be uncomfortable but not painful. A biopsy is recommended if either the DRE and/or the PSA are suggestive of cancer (hardness, irregularity, or a mass on the DRE, a steadily rising PSA level or a PSA level that is higher than the median level for the age group). The biopsy procedure uses an ultrasonic probe that is inserted into the rectum and a biopsy needle that is directed into various regions of the prostate gland. This procedure, performed under local anesthesia, is relatively painless and is normally performed in an office setting.

Once prostate cancer has been diagnosed by a prostate biopsy, the physician seeks to determine the extent of the cancer (i.e., the “T” stage) and whether it has already spread to the lymph nodes and/or the bones. The clinical T stage is determined by the DRE and can be divided into the following categories:

T1a: Cancer is found incidentally during a transurethral resection (TURP) for benign prostatic enlargement. Cancer is low grade (Gleason sum of 6 or less) and present in less than 5% of the tissue removed

T1b: Cancer Cancer is found after a simple prostatectomy for presumed benign enlargement but is high grade (Gleason sum of 7 or more) and/or is present in more than 5% of the tissue removed

T1c: Cancer is found by needle biopsy that was done because of PSA abnormalities

T2: Doctor can feel the tumor when a digital rectal exam (DRE) is performed but the tumor still appears to be confined to the prostate

T2a: Cancer is found in one half or less of only one side (left or right) of the prostate

T2b: Cancer is found in more than half of only one side (left or right) of the prostate

T2c: Cancer is found in both sides of the prostate

T3: Cancer has begun to spread outside the prostate and may involve the seminal vesicles

T3a: Cancer extends outside the prostate but not to the seminal vesicles

T3b: Cancer has spread to the seminal vesicles

T4: Cancer has spread to tissues next to the prostate (other than the seminal vesicles), such as the sphincter, rectum and/or wall of the pelvis

In addition to clinical staging, the physician seeks to determine the so-called “aggressiveness” of the cancer. This is done by determining the grade of the cancer; that is, how “aggressive” it looks under the microscope.

The most frequently used prostate cancer grading system is the Gleason system. Each area of cancer in the biopsy is assigned a Gleason pattern or grade between 1 and 5. The two most common Gleason grades within a biopsy are added together to give the Gleason “score” which is designated between 2 and 10. A Gleason score of 2-4 designates well-differentiated cancers that tend to be slow growing. Gleason scores of 5, 6, or 3+4 =7 (predominately pattern 3 with a lesser amount of pattern 4) are moderately-differentiated, while Gleason scores of 4+3=7 (mostly pattern 4) to Gleason 10 are called poorly differentiated. The second sign of aggressiveness is the PSA level before biopsy. In general PSA levels less than 10 are associated with a high likelihood of organ-confined disease, levels between 10 and 20 are worrisome for more extensive disease, while levels greater than 20 are worrisome for distant metastases, although cure is still sometimes possible.

What is a radical prostatectomy?

A radical prostatectomy is the removal of the entire prostate, the seminal vesicles, the tissue immediately surrounding them, and some of their associated pelvic lymph nodes.

When is surgery the best treatment for prostate cancer?

In general, prostate cancer surgery in Delhi is best performed in patients with clinical stage T1 or T2 prostate cancer (confined to the prostate gland) and in selected men with clinical stage T3 disease. While there are no absolute cut-offs, men with a PSA level less than 20 and a Gleason score of less than eight have a higher likelihood of cure. In certain circumstances, patients with more serious parameters are offered surgery. Prostate cancer surgery is usually restricted to men who are healthy enough to tolerate a major operation and have a 10-year or more life expectancy from other medical conditions. Life expectancy is assessed by both patient age and health.