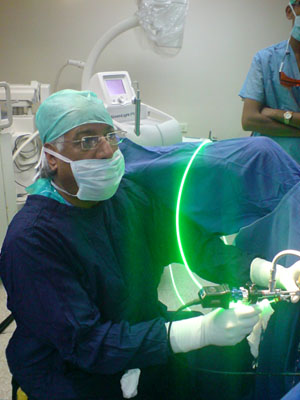 During prostate laser surgery in Delhi, your urologist in Delhi inserts a scope through the tip of your penis into the tube that carries urine from your bladder (urethra). The urethra is surrounded by the prostate. A laser is passed through the scope. The laser delivers energy that is used to shrink or to remove the excess tissue that is blocking the urethra and preventing urine flow.

There are different types of prostate laser surgery, such as:

Photoselective vaporization of the prostate (PVP). A laser is used to melt away (vaporize) excess prostate tissue to enlarge the urinary channel.

Holmium laser ablation of the prostate (HoLAP). This is a similar procedure to PVP, except that a different type of laser is used to melt away (vaporize) the excess prostate tissue.

Holmium laser enucleation of the prostate (HoLEP). The laser is used to cut and remove the excess tissue that is blocking the urethra. Another instrument, called a morcellator, is then used to chop the prostate tissue into small pieces that are easily removed.

Laser surgery may also be done to treat or prevent complications due to blocked urine flow, such as:

A number of procedures are available to treat BPH, but laser surgery has several potential advantages over other methods, such as transurethral resection of the prostate (TURP) and open prostatectomy. The advantages generally include: